This is a funny and actually heart-warming and well-acted story of a down-on-his luck actor turned high school drama teacher with issues! When the drama program is cut from the school budget, Mr. Marschz figures "what the heck" and writes a cathartic play from his heart - Hamlet 2. What if everybody didn't die? Steve Coogan is brilliant as Mr. Marschz. The character is so goofy, but instead of wanting to dismiss him, I found myself really liking him.

- Linda
Posted by The Librarians at 11:16 AM No comments: 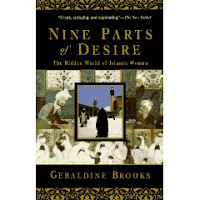 Nine Parts of Desire: the hidden world of Islamic Women
by Geraldine Brooks

As a reporter for the Wall Street Journal, Geraldine Brooks covered events in the Middle East during the religious resurgence in the 1980's. Everyone in our book club enjoyed her writing and thought that she framed the narratives well with political & religious background. Throughout the book, Brooks compares the oppressive rules with the text of the Koran and in many cases reveals a different interpretation. Her background as a reporter was helpful in presenting a fair & balanced approach throughout the book.

What we found interesting was the fact that the men had more to say than the women. The truth was the women were horrified by the fact that women were enforcing these rules upon women. From female circumcision to social isolation, the women were creating a world based on fear for themselves & their families. This book is a real eye opener about how ideas based on fear can take hold & alter a belief system.
Posted by The Librarians at 10:54 AM No comments:

An Infinity of Little Hours

An Infinity of Little Hours
By Nancy Maguire

It was a typical cold snowy January day last Thursday, but our afternoon book club disregarded the gloomy weather and heated things up with an intense discussion about our latest selection. An Infinity of Little Hours by Nancy Maguire is the tale of five young men striving to become members of the most ascetic monastic order in the world. The author's husband was one of the men attempting to dedicate himself to God by joining the Carthusian order. The book recounts his and the other men's experiences. Our book club was fascinated by the subject matter. The author goes in to great detail and it is an obviously painstakingly well researched book. We agreed that while it promoted great discussion it was not a book that most could sit down and read quickly. It is rather a book that one would read slowly and ponder over. It was a stimulating selection to start off 2009! 4.5 out of 5 coffee cups - Extremely interesting subject matter, but a little difficult to wade through.
Posted by The Librarians at 2:04 PM No comments:

The Longest Trip Home: A Memoir

If you enjoyed reading Marley & Me, this will be an equally enjoyable book for you. John Grogan’s memoir is about growing up, breaking away and coming home again. He describes growing up in a strict Catholic family, attending Catholic school and many mischievous incidents in-between. I laughed, I cried, I felt like I grew up with him.

Posted by The Librarians at 8:00 AM No comments: 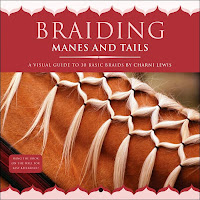 Braiding Manes and Tails: A Visual Guide to 30 Basic Braids
by Charni Lewis

Now is the time to start perfecting your horse’s braids for the 2009 horse show season. The excellent step-by-step instructions contained in Braiding Manes and Tails will certainly help to master techniques and simplify braiding. This book is good for beginners too and has information on getting started, braiding tools, safety, and other tips for having a well-groomed horse.

- Rose
Posted by The Librarians at 2:16 PM No comments:

Olive Kitteridge is a novel made up of short stories that tell of the lives of people in a small town in Maine. All of the stories are linked through the main character, Olive. Each new tale builds off the previous one so readers have many related short stories that enable them to see the true Olive. When we first meet her, she appears to be nothing more than a crabby old woman, but as the book unfolds, we learn more about this complex and interesting person, and come to identify with her. A wonderful read –

Alex & Me: How a Scientist and a Parrot Discovered a Hidden World of Animal Intelligence--And Formed a Deep Bond in the Process
by Irene M. Pepperberg

Scientist Irene Pepperberg worked with Alex, the African Grey Parrot, for 30 years. Her research showed that Alex was able to go beyond simple mimicry and actually understood what he was saying. He knew over 100 words and could distinguish color, shape and knew numbers up to six. This is the story of their relationship that resulted in a deep bond and extraordinary scientific achievements.

- Dixie
Posted by The Librarians at 9:42 AM No comments: