The Death of a Policeman (Hamish Macbeth series) 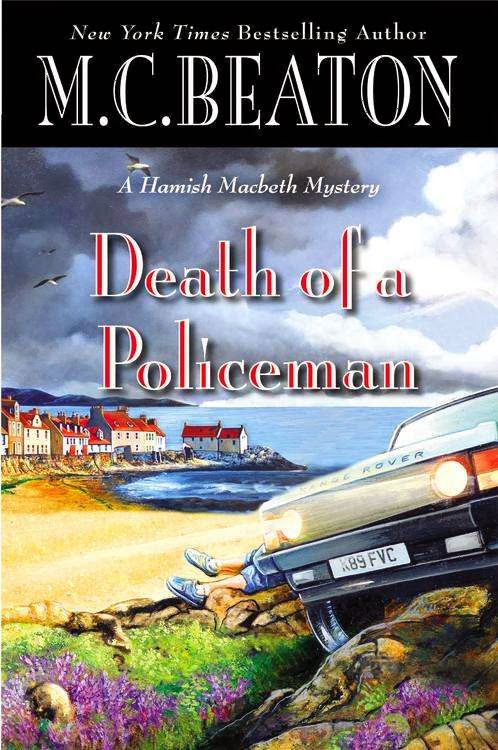 Sargent Hamish Macbeth returns in the 30th installment of the series based in the Scottish Highlands. Detective Chief Inspector Blair sends the good-looking Cyril Sessions to dig up dirt on Hamish in order to build evidence of his incompetence. Blair wants to close down the village office in Lochdubh and to get rid of Hamish. After Cyril is murdered, Hamish becomes a suspect due to the vengeful actions of librarian Hetty Dunstable.

I enjoyed the quirky relationship between Hamish & Dick and the crazy librarian, but this story didn’t have the warmth of the earlier editions. Hamish was a bit compromised in his detective work: "It's as if I've become one of them, he thought." I hope that #31 will signal a return to a more conscientious Hamish.

~ Paula
Posted by The Librarians at 1:24 PM No comments:

The Fault in Our Stars

This book involves characters with cancer, but it is truly not about cancer.

This book will shower you with happiness, drown you with sadness, and hug you with cuteness.
~ Aiden
Posted by The Librarians at 4:38 PM No comments:

Magnificent Vibration (Sometimes Heavenly Intervention Can Put You Through Hell)

Fiction written by celebrities can be like fingernails on a chalkboard - pretty awful. This one is a delightful exception. It's a quirky story of a young man, Horatio Cotton, who has reached the end of his rope and is in the throws of depression. He shoplifts a book called Magnificent Vibration, dials a phone number written in the book, and ends up speaking with God. This conversation sets Horatio, who calls himself Bob, on an immediate roller coaster ride for the next few days as he meets 2 new friends and deals with a series of absolutely crazy happenings, all the while trying to discern the answer to some of life's meaningful questions. It's well written, at times hilarious, at times sad and almost everything in between. I enjoyed it very much but would definitely caution the more conservative reader.


~ Linda
Posted by The Librarians at 4:32 PM No comments:

Michael Quinn and Dani Cafferty are reunited again in this book. It is the second in the Cafferty and Quinn series, the first book being Let the Dead Sleep. I have mixed feelings about this story. The mystery of the haunted painting, "The Ghosts of the Mind", painted in the 1800's by a (fictional) friend of Mary Shelley (Frankenstein's creator) had an interesting back-story, but it became more and more unbelievable as the story progressed.

I enjoyed the New Orleans setting and the relationship between Dani, Michael and Dani's shop employees and friends. I liked the wealthy and spunky new character, Hattie. But a murderous painting that is reactivated by blood - really? I will read the next installment in the series, but I hope that it is more believable.

~ Paula
Posted by The Librarians at 12:30 PM No comments:

Written for tweens, the story takes place on the coast of Maine during the early years of World War II. It's the sequel to The Romeo and Juliet Code, published in 2011. In the first book, 11-year-old Felicity Bathburn Budwig travels with her parents from England to the Maine coast in June, 1941 and is left with her father's family, the Bathburns, whom she has never met. Her parents leave in a hurry, leaving no clue as to their whereabouts. Though loving toward Felicity, whom they nickname Flissy, the Bathburns are an odd bunch with many secrets. Felicity is sad, scared and lonely but determined to find out about the mysterious goings-on in the house. In Romeo Blue, it is 1942, Flissy is 12 and the U.S. is in the throws of the war. Much has changed in the country and within the Bathburn family. Flissy dearly loves Derek, the Bathburns foster son. One day a man arrives claiming to be Derek's birth father. Flissy thinks there is something not quite right about this person yet Derek needs for his claim to be true. It's a charming coming of age story combined with a slice of life on the homefront as no family is untouched by the events of war.

Posted by The Librarians at 11:01 AM No comments:

Blogging on the Technology Bus

We are blogging from the Mobile Technology Bus during our class. Lovely weather outside!

Posted by The Librarians at 3:05 PM No comments:

Roberts produces another terrific blend of suspense and romance. This time it's through the worlds of art, high-end antiques and collectors that will stop at nothing to get what they want.

Lila is a house-sitter and author that witnesses a brutal murder. Ash is an artist and the brother of the victim. They meet and are soon being chased by an assassin, who thinks nothing of leaving a trail of bodies in New York City and Italy in her pursuit of a valuable "lost" antique.

~ Rochelle
Posted by The Librarians at 3:43 PM No comments: