After serving out a year of hard labor in the salt mines of Endovier for her crimes, 18-year-old assassin Celaena Sardothien is dragged before the Crown Prince, who offers her freedom on one condition: she must act as his champion in a competition to find a new royal assassin.

Her opponents are men-thieves and assassins and warriors from across the empire. If she beats her opponents in a series of eliminations, she'll serve the kingdom for three years and then be granted her freedom. Celaena trains with the captain of the guard, but she's bored stiff by court life. Things get a little more interesting when the prince starts to show interest in her... but it's the gruff Captain Westfall who seems to understand her best.
Then one of the contestants turns up dead... quickly followed by another, then another. Can Celaena figure out who the killer is before she becomes a victim?

~Crystal
Posted by The Librarians at 2:57 PM No comments:

Water From My Heart

Charlie Finn is a likable fellow. He is also a drug dealer. On his own since the age of sixteen, he earned a scholarship to Harvard. He is book smart and street smart. That comes in handy with the lucrative venture he runs off the coast of Miami. For a long time, he is successful at keeping his personal and business lives separate but that changes suddenly and with terrible consequences.

While in Nicaragua he meets some wonderful people that he suspects his business dealings have affected. Especially a beautiful woman and her young daughter. Now he is determined to make things right if he can. If he lives long enough.

~ Dixie
Posted by The Librarians at 1:45 PM No comments:

Bestselling-fiction crime-writer Jerry Grey has been diagnosed with early-onset dementia at age 49 - but that is the least of his problems. We first meet Jerry when he is in a police interrogation room confessing to a murder that he has committed. There is a policeman and a beautiful woman in the room with him explaining to Jerry that he is an author and that the murder that he is confessing to is from a scene in his first crime novel: A Christmas Murder. He learns that the beautiful woman sitting next to him is his daughter, Eva.

We learn about Jerry from Jerry during his lucid moments, his deranged moments, and from Jerry in his "madness journal" writing to future Jerry (FJ). Eventually, his pseudonym Henry Cutter begins "talking" to Jerry and we learn about him from yet another angle.

He begins to doubt his sanity as he begins to fear that he may be acting out murderous acts from his books. But is he? This is a riveting story of Jerry's descent into madness as we watch it through his eyes.

The audio version, read by Paul Ansdell, is outstanding - there were times that I didn't get out of my car until I finished a chapter! I will be reading more mystery-thrillers from internationally best-selling author, Paul Cleave.

Posted by The Librarians at 10:38 AM No comments:

Emma Gingerich was raised in an Amish community in Eagleville, Missouri. She disagreed with the beliefs and traditions of her Amish life and felt that she would never fit in and be happy. At the age of eighteen she left the only life she had ever known. She had no idea what to expect when she left her parent’s home and had to be told by other Amish who had escaped, how to live in a world of freedom where she could decide for herself how she wanted to live. She learns the hard way that all “English” are not to be trusted as she suffers theft and a rape. She didn’t know anything about sex or life in general.

She certainly is a brave girl and hasn’t let these bad experiences stop her. She has pushed on and at the time of the writing was continuing her college education.

~ Dixie
Posted by The Librarians at 10:04 AM No comments:

The Age of Adaline

Adaline Bowman has miraculously remained 29 years old for almost eight decades. She has lived a solitary existence, never allowing herself to get close to anyone who might reveal her secret. But a chance encounter with charismatic philanthropist Ellis Jones reawakens her passion for life and romance. Then a weekend with his parents threatens to uncover the truth. Adaline has to run away again. This time it will change her life forever.

~ Dixie
Posted by The Librarians at 12:49 PM No comments:

I enjoyed Nobody’s Cuter Then You so much that I had to read this one too. I wasn’t disappointed. She has a great sense of humor. Even the chapter titles are funny - “I wanted my Epidural in the first trimester”, “Lifestyles of the sick and feverish” and “Like a band of idiots we go down the highway”. I put the book on hold for my BFF and we read it at the same time. We had a few phone calls like this: “Page 35 is hilarious!” and “ Yep. Birthday party competition. I knew there was a name for it”.

Melanie takes you along on her journey of pregnancy (eight tests? really?), labor, delivery and finally motherhood. Like she says “Before I had a child of my own, it was super easy”. Yep.

~ Dixie
Posted by The Librarians at 3:51 PM No comments:

Designer Sara Madina owns a shop called Perfect Touch in San Francisco.  The shop specializes in fine and folk art from all over the world.  Sara travels to Jackson, Wyoming (one of my favorite places and probably the main reason I chose this book) to visit a client with some very fine art to sell.  The art is by Harris “Custer” Armstrong; one of his paintings was in a movie, raising the appeal of his art to the movie going public and then some.  Sara is hopeful that the paintings will command a great deal of money for her client who eventually becomes her lover.  Yes, this book gets saucy but not to the determent of the story line.  Also, the writing can be a little sappy in places, but not too often.  This book has a dramatic ending that will keep you on the edge of your seat.

I think you will enjoy this story even if you have never been to Jackson, Wyoming.

~Beckie H.
Posted by The Librarians at 1:00 PM No comments: 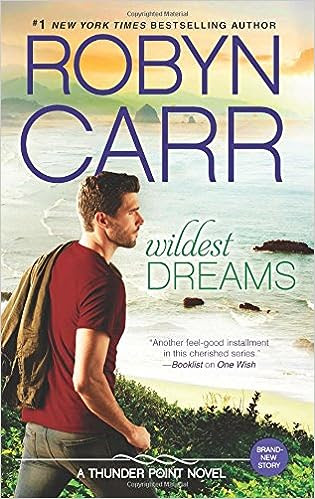 Robyn Carr fans will truly enjoy this feel-good addition to the Thunder Point series. One of the things I like about Carr’s books is the happy endings. Her books have the right amount of conflict and just enough intrigue to keep you guessing about the outcome of the romance.

Thunder Point’s richest, most frail inhabitant is Winnie Banks and she is cared for by special care nurse Lin Su Simmons. Lin Su and her son Charlie plan to stay as long as Winnie is able to live in her home (Winnie has ALS). Triathlete Blake Smiley moves into the house next door to Winnie and makes a big impression on fourteen year old Charlie. Lin Su feels she only has time for her job and taking care of Charlie, when Blake starts helping with Charlie, her opinion of Blake changes…

I hope all Thunder Point fans enjoy this latest edition by Robyn Carr.

~ Beckie H.
Posted by The Librarians at 3:06 PM No comments:

The Nature of the Beast 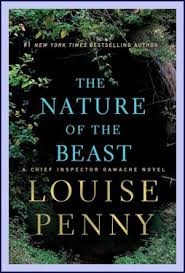 Armand Gamache is back in Louise Penny's eleventh Three Pines Mystery.  Armand and Reine-Marie are enjoying their retirement in Three Pines.  Isabelle Lacoste is now Chief Inspector of the Surete du Quebec.

In this installment,  a young boy is murdered in Three Pines after discovering something hidden in the woods.  Then there is a second murder.  At the heart of the mystery is Project Babylon, a weapon of destruction, that can claim the lives of thousands.  Secrets long buried by poet Ruth Zardo are the key to solving this crime.

I really enjoyed this mystery based on the true character Gerald Bull - a scientist turned arms dealer.  I can't wait to read the next Three Pines Mystery!


Posted by The Librarians at 10:55 AM No comments: 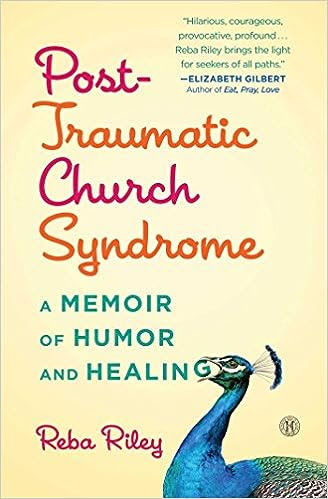 Reba Riley's twenty-ninth birthday was not a good time to undertake a spiritual quest, but when chronic pain prompted her to focus on one thing she could fix - her whopping case of Post-Traumatic Church Syndrome - she undertook a challenge: Visit thirty religions before her thirtieth birthday.

During her spiritual sojourn, Reba: Danced the disco in a Buddhist temple; Went to church in virtual reality, a movie theater, a drive-in bar, and a basement; Got audited by Scientologists, mobbed by NPR junkies, and killed (almost); Fasted for thirty days without food; Learned to meditate with an Urban Monk, sucked mud in a sweat lodge with a Suburban Shaman, and snuck into Yom Kippur with a fake grandpa; Discovered she didn't have to choose religion to choose God ... or good. For everyone who has ever needed healing of body or soul, this poignant, funny memoir reminds us all that transformation is possible, brokenness can be beautiful, and sometimes we have to get lost to get found.

Posted by The Librarians at 3:25 PM No comments:

The Huntress of Thornbeck Forest

Odette justifies her crime of poaching because she thinks the game is going to feed the poor, who are all but starving, both in the city and just outside its walls. But will the discovery of a local poaching ring reveal a terrible secret? Has the meat she thought she was providing for the poor actually been sold on the black market, profiting no one except the ring of black market sellers?

The one person Odette knows can help her could also find out her own secret and turn her over to the margrave, but she has no choice. Jorgen and Odette will band together to stop the dangerous poaching ring . . . and fall in love. But what will the margrave do when he discovers his forester is protecting a notorious poacher?
~Crystal
Posted by The Librarians at 12:24 PM No comments:

by C. S. Lewis
(Audiobook version)
The Screwtape Letters are a series of letters between Screwtape, a Senior Undersecretary in Hell and his nephew, Wormwood, a Tempter Spirit assigned to bring the human John Hamilton to Hell. Screwtape gives Wormwood advice on different ways to tempt humans to sin.
The book is simply letters from Screwtapes point of view, but the audio version is a full cast dramatization and is exceptionally well done.

~Crystal
Posted by The Librarians at 12:24 PM No comments:

The second book of the Tarot Mysteries (first was the White Magic Five and Dime) is as engaging as the first. Alanis continues to right the wrongs her deceased mother put upon past clients of the store, but finds that sometimes when she thinks she’s helping, she’s only making things worse.  Her belief in the tarot cards wavers a bit, straying a bit from her initial feelings that they are a complete scam.  There are even new romance possibilities, which if you love Alanis, you’ll be rooting for a positive outcome.  The last word of the book is a huge cliffhanger, and will leave you dying for the next one.

Posted by The Librarians at 11:37 AM No comments: