This all star cast features Jon Favreau as a moody, depressed and volatile chef who has become stale in his current restaurant. After receiving a very negative review from an important food critic, the chef loses his mind and walks out of his kitchen without a plan. His ex-wife, played by Sofia Vergara, suggests that he buy a food truck.

Partnering with his young son and his former sous chef, the Chef travels across the U.S. on his new venture which brings his estranged family together.

~ Paula
Posted by The Librarians at 3:28 PM No comments:

Set in a small beachside community in Australia, Big Little Lies tells the story of three friends: Madeline who is funny, passionate and ready to fight against any injustice (real or perceived); Jane, a young, unwed mother who is new to town and harbors secrets about her son's father; Celeste, a beautiful and very wealthy woman who appears to have it all, but is secretly living a nightmare.

These three women have children entering kindergarten at Pirriwee Public School. Although their backgrounds and personalities are very different, these mothers bond and become close friends who stand up for each other and keep their deepest secrets safe.

Liane Moriarity has been compared to Gillian Flynn (Gone Girl). I see a similarity in the writing style: the story begins with a tragic event, which is actually the end of the story, and the remainder of the book goes back in time and moves forward again until the tragic event is explained through narratives and interviews from different prespectives.

I really enjoyed the pacing and the relationship between the characters while trying to figure out the clues!

Posted by The Librarians at 3:13 PM No comments:

Written by one of the coaches from The Biggest Loser, this book highlights 20 basic rules for healthy eating to slim down and stay that way. Most of the rules are familiar and are presented in a clear, concise manner. He includes menus and recipes that will help you get going if this is the diet for you.

~ Dixie
Posted by The Librarians at 2:29 PM No comments:

It’s Christmas in New York City and Jemima Pitt has traveled with Delphinia Cardew from Britain, who is the bride-to-be of the aristocrat Brent Albright. This wedding will join two very rich families.  Jemima is to stand in for Phinnie’s mother, Maria, who is absent. When Jemima finds out Phinnie’s mother is alive and probably in New York City, she thinks she has a right to know her daughter is getting married and determines to find her. The grooms charismatic brother also wants to find Maria but for different reasons. He convinces Jemima to help him find her and the next thing she knows she is arrested for murder!

Jemima, now out on bail, has to find answers. She meets a handsome young police officer who believes she is innocent. The two search for the truth together and eventually find it and each other.

~Dixie
Posted by The Librarians at 11:17 AM No comments:

This is another book on CD that kept me on the edge-of-my-seat. This novel is full of twists and turns starting with Shelby having to deal with the loss of her husband of only five years. After his death, she finds out that he had been living a double life. This other life was completely opposite of the life he was living with his wife and daughter.

She goes home after selling most everything out of their oversized home and putting it on the market. He had left her in extreme debt with a private investigator pestering her about things he had done that she knew nothing about.

Parts of this story are pretty saucy (just thought you might want to know). After a few months back home with people that truly love her, she finds her strength and gumption to move on and rebuild her life.

I hope you enjoy The Liar by Nora Roberts. 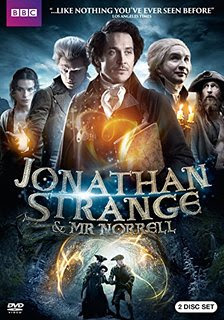 It is hard not to fall in love with the TV series Jonathan Strange and Mr Norrell from the BBC.  It is the captivating story of two of England's most powerful magicians who must join forces to save England from the dark arts which includes using the dark arts!

The battle of good versus evil becomes blurred in this period drama.   The actors Bertie Carvel and Eddie Marsan bring the two main characters to life.

If you like the Hobbit or even Harry Potter,  then give it a try.
I didn't want it to end.

-Holly
Posted by The Librarians at 12:09 PM No comments:

The winds of change are blowing through Thebes. A devastating palace fire has killed the 18th dynasty’s royal family— all with the exception of Nefertari, niece of the reviled former queen Nefertiti. The girl’s deceased family has been branded as heretical, and no one in Egypt will speak their names. A relic of a previous reign, Nefertari is pushed aside, an unimportant princess left to run wild in the palace. But all of this changes when she is taken under the wing of pharaoh’s aunt, and brought to the Temple of Hathor where she is educated in a manner befitting a future queen. Soon Nefertari catches the eye of the crown prince, and despite her family’s history, they fall in love and wish to marry. Yet all of Egypt opposes this union between the rising star of a new dynasty and the fading star of an old, heretical one. While political adversity sets the country on edge, Nefertari becomes the wife of Ramesses the Great. Destined to be the most powerful pharaoh in Egypt, he is also the man who must confront the most famous exodus in history.

~Crystal
Posted by The Librarians at 9:12 AM No comments:

Seventeen-year-old Ismae escapes from the brutality of an arranged marriage into the sanctuary of the convent of St. Mortain, where the sisters still serve the gods of old. Here she learns that the god of Death Himself has blessed her with dangerous gifts and a violent destiny. If she chooses to stay at the convent, she will be trained as an assassin and serve as a handmaiden to Death. To claim her new life, she must destroy the lives of others.

~Crystal
Posted by The Librarians at 9:10 AM No comments:

Death of a Liar

Hamish MacBeth is a laid back policeman in a small Scottish village. He lives at the police station with his dog and cat, various other animals and his helper Dick Fraser. Hamish likes his “lazy” lifestyle and does what he can to keep it that way. There is one thing he would like to change - his marital status! He is pretty sure Dick is holding him back by living with him at the station. He needs to get Dick to move out!

Hamish and Dick receive a call from a woman about a break in. While investigating they discover that no crime happened and she is a pathological liar. A few days later, a couple new to the area are found murdered and the “liar” who called before also turns up dead.
Detective Chief Inspector Blair, Hamish’s nemesis, takes over the case and tries to keep Hamish out of the loop. Hamish is sure these two cases are related somehow and he continues to investigate. Along the way he meets two new women (possible relationship material) and keeps trying to think up ways to get rid of his housemate Dick. He eventually does solve the murders and Dick moves out but certainly not the way Hamish expected. An easy read that I enjoyed.

~ Dixie
Posted by The Librarians at 12:41 PM No comments:

If you are a Downton Abbey fan then I think you will truly enjoy this book that is set in the same time period in very similar surroundings. Rachel Woodley has grown up thinking that her father died when she was four years old. Through a series of events she finds out that perhaps he is actually alive. Rachel grew up poor but happy, just her and her mother. She is employed as a governess in France when she finds out that her mother is very ill back in London. She races to be with her but she is too late. Rachel finds a clipping in her mother’s possessions and schemes to find out the truth. Please join me in discovering what really happened all those years ago; I hope you enjoy this story as much as I have.

The Watchmaker of Filigree Street

The story takes place in 1880’s London, Oxford, and Japan; and is a light mix of history, fantasy, steampunk, and shades of Sherlock Holmes thrown in for good measure.

Nathaniel, a telegraphic clerk in the Home Office, receives a mysterious birthday watch which saves his life.  He goes in search of the maker of the watch and finds Mori, a Japanese of noble descent, with powers of clairvoyance, who lives in London and made the watch.  The tale spins from there to include fascinating details of Victorian era London.
This is one of those books that caused me to have ‘no respect for the next day’.

~ Sally
Posted by The Librarians at 2:23 PM No comments:

I took this PG movie home simply because Jim Parsons (Big Bang’s Sheldon Cooper) is the voice of “Oh”. I have to say I am not surprised at all by the high quality entertainment proved by this DreamWorks movie. Sure, it’s a kid’s movie but as always with their movies DreamWorks provides humor adults can appreciate.

Sometimes things are not always as they seem, the Boov are running scared from a fierce enemy and land on Earth, to live in harmony with the humans. “Oh” (not the most popular Boov) is the hero of this story and turns out to be a most remarkable guy. Home was a fantastic movie, a true “must see” no matter your age.

~ Beckie H.
Posted by The Librarians at 1:18 PM No comments: