Translated from the Swedish, this is the story of two pen-pals: Sara from Sweden and Amy from Broken Wheel, Iowa. Their love of reading bonds these two friends together across the miles until Amy invites the lonely and introverted Sara to visit her in the U.S.

This book would appeal to readers who enjoy charming stories about small-town life, bookshops, and awkward romances. Many titles and authors are discussed and recommended throughout the book and, to my pleasant surprise, they are listed by category at the end of the book! This would make a great book club selection.

Read-alikes: The Storied Life of A.J. Fikry and The Guernsey Literary and Potato Peel Pie Society.

~ Paula
Posted by The Librarians at 1:25 PM No comments:

Siege and Storm (Shadow and Bone #2)
By Leigh Bardugo
Darkness never dies. Hunted across the True Sea, haunted by the lives she took on the Fold, Alina must try to make a life with Mal in an unfamiliar land. She finds starting new is not easy while keeping her identity as the Sun Summoner a secret. She can’t outrun her past or her destiny for long.

Ruin and Rising (Shadow and Bone #3)
By Leigh Bardugo
The capital has fallen.
The Darkling rules Ravka from his shadow throne.
Now the nation's fate rests with a broken Sun Summoner, a disgraced tracker, and the shattered remnants of a once-great magical army.
~Crystal

Posted by The Librarians at 12:42 PM No comments:

Life is full of obstacles and being born dead is unthinkable. That’s how David Ring’s life began in Arkansas in 1953. David’s lifeless body is placed aside for eighteen minutes while the doctor attends to his mother who is near death after his birth. Miraculously, David survives but not without serious consequences.

As a teen, David faces the loss of his beloved mother and his world is shattered. He is bounced between relatives and doesn’t really fit in anywhere. He is angry, rude and unapproachable. He faces bullying at school and horrendous abuse at home, enough to lead him to try suicide.

The local pastor encourages his son to befriend David and he tries - but how do you make friends with someone who won’t even speak? This struggling friendship starts a journey that is remarkable and extraordinary.

~ Dixie
Posted by The Librarians at 3:15 PM No comments:

Dead, TO BEGIN WITH 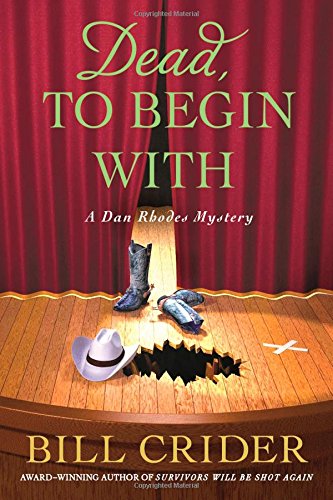 I think I may have found a new author to read.

This mystery doesn’t give away the “who done it” till the very end, is sprinkled with humor and suspense. County Sherriff Dan Rhodes has to put up with employees that are long winded and whiney; adding to the frustrations of his job. A wealthy man has fallen to his death and it falls on Sherriff Rhodes to determine if someone helped him to his death. Interviewing suspects is difficult due to the fact that they seem to be covering up something. Like any good mystery the truth comes out in the end.

I hope you will enjoy reading Dead, TO BEGIN WITH as much as I have.

~ Beckie H.
Posted by The Librarians at 3:12 PM No comments: