The Anteater of Death 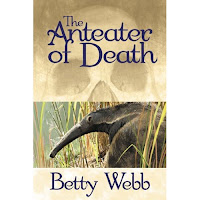 The Anteater of Death
by Betty Webb

This is the first book in the Gunn Zoo Mystery Series.

A dead body turns up in the enclosure with Lucy, the giant anteater. Anteaters can do a lot of damage, but did Lucy commit murder? Theodora "Teddy" Bentley, the zookeeper, has to find the real murderer before Lucy gets deported. Then another dead body turns up. Teddy searches for clues amid monkeys, wolves, and a cast of interesting characters. An enjoyable read.