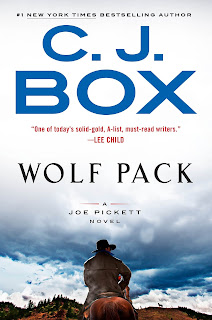 BY: C.J.Box
Joe Pickett is a Wyoming game warden and trouble is brewing in his own back yard.  Joe and another game warden discover that someone is operating a drone and illegally killing wildlife by running them to death. When Joe tries to go after the drone operator, he is asked by the FBI and DOJ to stand down. Now things get even more complicated when he learns that the son of this suspect is dating his daughter! Meanwhile, there are more murders in the area than they have ever seen and the body count is rising. Joe suspects the Wolf Pack – four vicious killers who work on behalf of a drug cartel- are to blame. It looks like they might be after the same suspect he is.