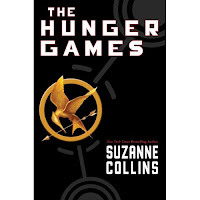 The Hunger Games
by Suzanne Collins

Set in a futuristic society (the former ) run by "The Capitol," the country of Panem is a police state divided into 12 districts. Though some of the districts are fairly well off, those in District 12, the coal district, are literally starving. Sixteen-year old Katniss Everdeen feeds her family by hunting illegally. Each year, The Capitol hosts "The Hunger Games" - a televised contest in which one boy and one girl from each district are chosen by lottery to compete. The contest is on live television and the players compete to the death until only one teen remains. This winner then returns home to a life of luxury. All citizens of Panem are required to watch and many give money to sponsor favored contestants. When Katniss' gentle 12-year-old sister is chosen in the lottery, Katniss volunteers to take her place. Though the plot sounds like something I wouldn't enjoy reading, I could not put this book down. Katniss is absolutely compelling in her maturity, empathy and skill. Yes, there is bloodshed but it is tempered by the fast pace and twists and turns of plot. This is a terrific read!